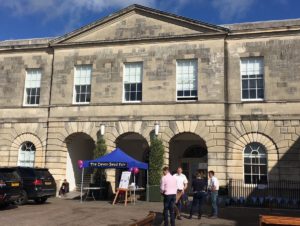 Then the following Sunday, 20th May, at Devon Bead Fair, Exeter Castle, Castle Street, Exeter EC4 3PU. Yes, this is actually in the Castle – great location!

We have many new beads on show from a 30-box 600 kg shipment just arrived in the UK. Say your a MrBead Newsletter reader for a free gift!   We’re at over 30 shows this year, all with a bigger display: All our 2018 Bead Fairs.

To save us over 600-miles extra drive this week, MiMi and I are staying West between these two bead fairs, taking a few days break in Devon.

We’re looking forward to taking the steam train and ferry from Paignton to Dartmouth, and even a few days under canvas if the weather permits.

Therefore online orders between 11th to 18th May will be delayed.

For 15% off anything with no minimum order key PRAYER in the box at checkout. Use right away as offer ends Friday 18th May. Can be used for UK and international orders on any of our stores below: 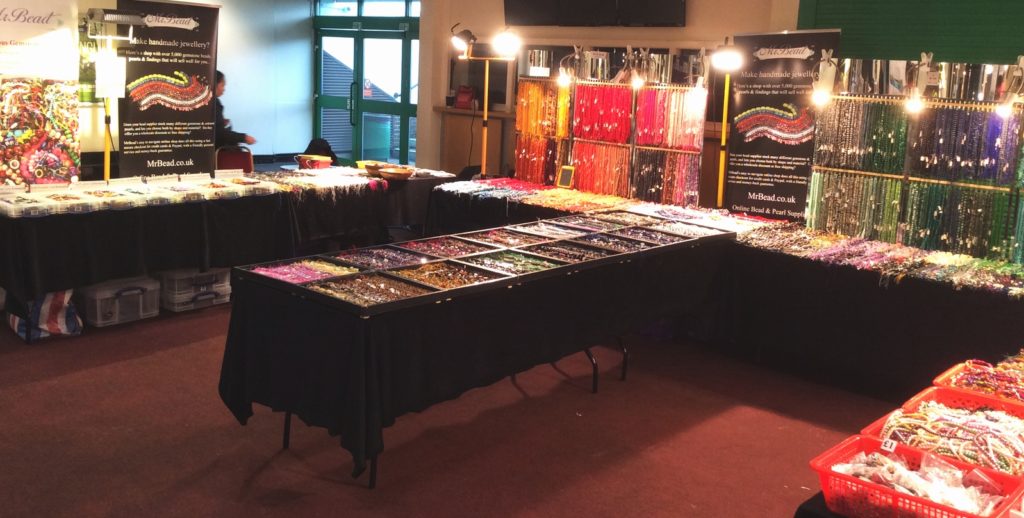 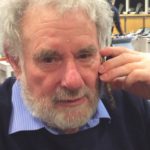 Always nice to visit Brighton, even in the cold and mist.  Not a bad turnout, despite the snow that weekend – it was really coming down white while we packed up on the Sunday!

Nice display, nice customers, nice show. We will be back in November. Pic shows Micheal from Bead Buyer reporting a sale! 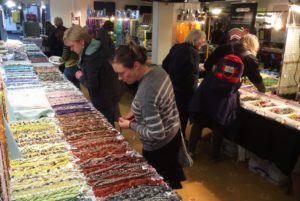 Because of a Sunday Boot at Newton Abbot, we were forced to use the Exeter Racecourse instead.

Not so good. The two halls were both far too small, so we didn’t have enough space to display all the beads we brought. A limited football further depleted our takings, so may not return in 2019. 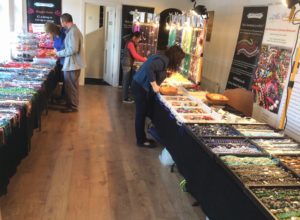 Better than expected with many visitors from North London – only 20-minutes up the M1.

Real rush setting up though, as we can’t get into the hall until 9.15am because of the hotel’s breakfasts.  It’s because of this and the steps we only do this one once a year now. 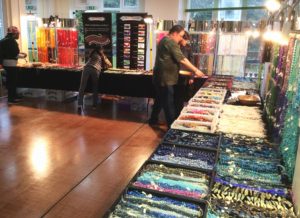 Quieter than expected – maybe because it was too close in time and distance to Luton (next day and 30-miles).

Also, a killer humping half-a-tonne of beads up and down the hill into the venue. Nice hall, but a little inaccessible, especially with rather narrow entrance doors too. MiMi and I were slightly stiff the next day! 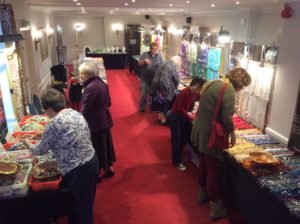 This was the best Norwich show so far. Many visitors, lively atmosphere, and plus new hotel decor.  Many regulars and newcomers from the East Anglia area, and even London.

Peter and Lorraine Cannel had a great time! See us next time in Norwich on Sunday 1st July.

Best Big Bead ever for us! Always busy, but I think it was all our new stones that paid off. I still felt a little stiff on the Monday after, but all the work was well worthwhile. Looking forward to return to Sandown Park on 20th October. 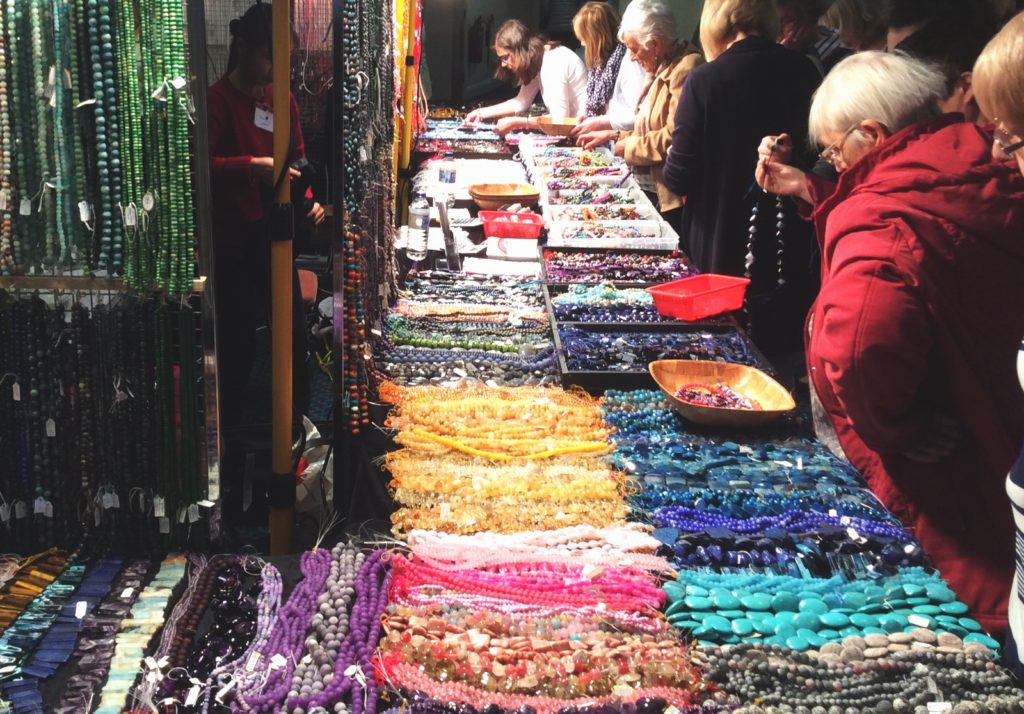 Another popular bead festival by Gordon Halfpenney at Haydock Park. Always a busy show close to Liverpool, where MiMi and I spent a day after the the show before returning to Norwich. Our first time on the Mersey.

However, this fair was much busier than usual, with us taking a record amount. Was so busy for the first 3-hours, I couldn’t go to the toilet! Can’t wait to get back on 30th September. 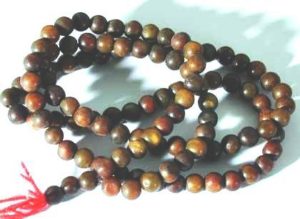 The word ‘bead’ derives from the Old English noun ‘bede’, meaning a prayer. Beads have been used to count prayers for almost 2,000 years.

Rosary Beads
However, Rosary beads only date back to the 12th and 15th centuries, for meditation and prayer to Christ and the Virgin. 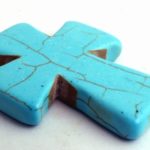 Then during the 16th century, the Protestant Church condemned worship of the Virgin Mary an act of heresy, encouraging the Catholic Church to support the rosary.

As Catholic missionaries spread in South America and the Philippines, the significance of rosary beads intensified. Since then the rosary has always been a symbol of rebellion. 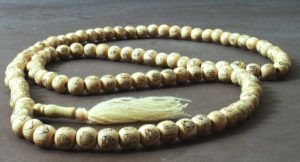 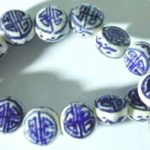 A mala is a string of beads used to meditate and count mantras. Traditionally they’re 108 beads, plus a ‘guru bead’.

The Tibetans used to carve skulls into each bead to remind them that all life must come to an end. 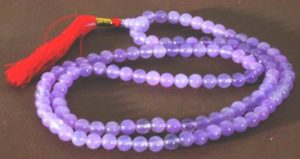 They can be made from many materials like sandalwood, amber, ceramic, seeds – and a new trend combines the energy of semi-precious gemstone beads.

See All Our Chinese Mala Beads at MrBead.co.uk or MrBead.com 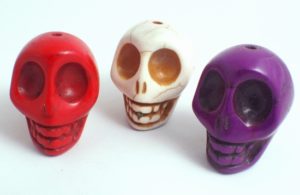 New Trend
Skull jewellery is once again popular. Especially with the young, who wear skull rings on their fingers and hang skull pendants on their bags. The media adds to the craze with many celebratory discreetly showing skulls. Especially hot hip hop artists like King Ice who wears skulls on expensive shamballa bracelets.

Originally skull jewellery was only a Tibetan Buddhist thing.

Skulls have a negative context in Western culture, but to Buddhists they remind them to focus on reaching Nevada. The ultimate rebirth, when one finally escapes the suffering of terrestrial life – the final goal of their cycles of death and rebirth. Seeing skulls prevent Buddhists from wasting time building their ego or wealth, all of which becomes useless upon death. 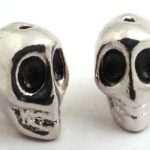 Modern gothic culture has some similarities to Tibetan or Vajrayana Buddhist. Goths like to highlight suffering, so as to contrast from living and create an optimistic outlook.

This similarity is rather like the oriental concept of yin and yang – opposite and constant flowing forces. Increase yin, and yang with decrease, and vice versa. Likewise, draw attention to death, and life with become brighter.

To others, skulls remind that we all have to die. Skulls show that life is not permanent and are a symbol that we are all flirting with death. In this context they represent a quest to survive, a reminder to be careful. For the same reason hot-rodders hang a furry dice inside their cars. A sign of danger. 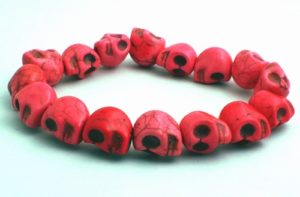 In the world of rock music, skulls have always been worn by the stars. Every rocker sports a white metal skull ring, or a skull bracelet or necklace.

Keith Richards of the Rolling Stones has worn a skull ring since the early seventies. Ozzy Osbourne and Axel Rose would never be seen without skull jewellery. To them skulls don’t just represent a fling with death, but a symbol of survival. 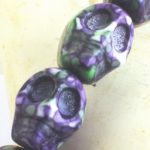 Some link the skull image to rebellion, explaining why pirates fly the skull and cross bones. Outlaws to society want to show they live by their own values, and will not be forced into a way of thought by others who have an alternate and often immoral motive. Many people hate the way corrupt governments or greedy capitalists try to manipulate their hard earned cash.

This reasoning leads to the wearers’ of skulls believing that they deter people from messing with them. Similar to old seagoing pirates flying their flag to frighten others away – and in conflict, the hope other ships would surrender without a fight.

Exhibit at a MrBead Show
We have limited space available for crafters at some of our own bead shows:
At Berwick Upon Tweed on 18th August. Details at http://www.mrbead.co.uk/berwickupontweedbeadfair.htm
In Cornwall on 17th June & 2nd September at June Cornish Bead Fair or  September Cornish Bead Fair.
In Scotland at Perth on 19th August at http://www.mrbead.co.uk/scottishbeadfair.htm. We also need help at this one, if you’re interested email Nigel – payment for the day in cash or £150 worth of beads.
Or our Essex Bead Show on Sunday 24th September at http://mrbead.co.uk/essexbeadfair.htm

We market for beaders making  jewellery, rather than selling ready-made jewellery – so to attract your customers, you may need to market yourself. If interested, email Nigel at nigel@MrBead.com 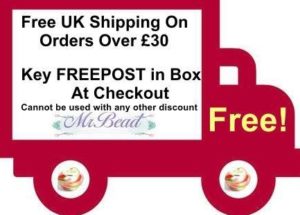 For free shipping from our bead store enter FREEPOST in the box at checkout.